What is Digital Marketing?

It can be done online and offline, and in fact, both kinds are important for a well-rounded digital marketing strategy.

Remember billboards? I do. 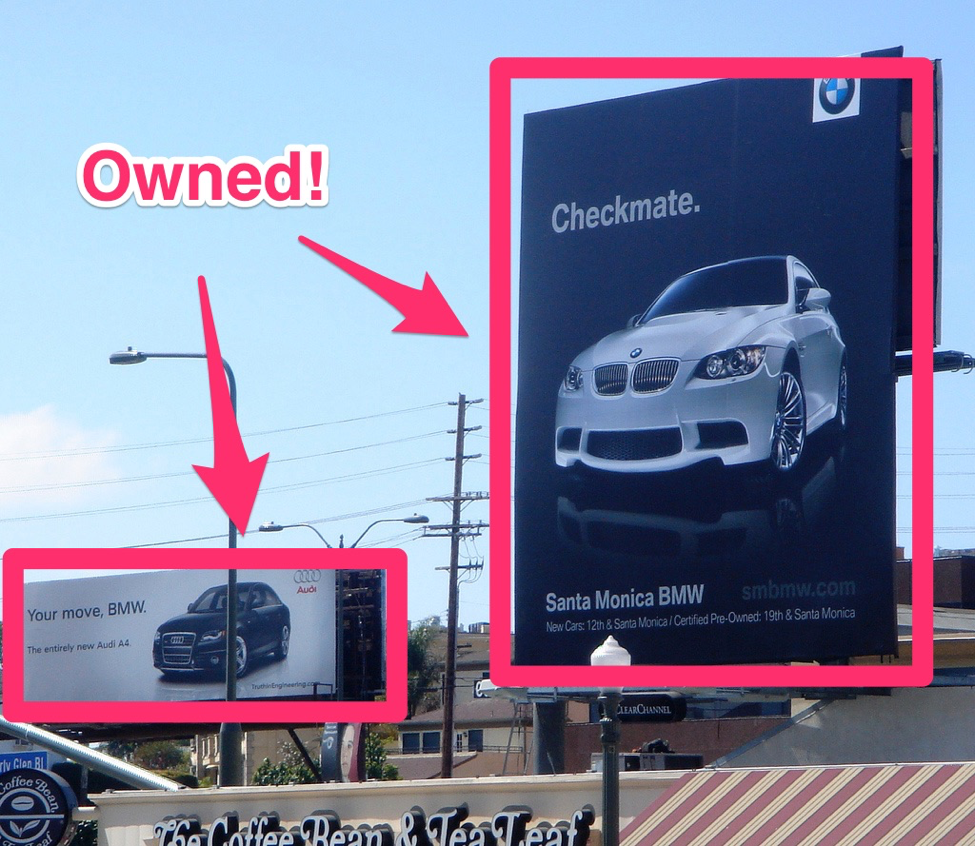 As a young kid in California, my experiences from the back seat of our car mostly alternated between: “Mom, when are we there?” and “Uh, look, McDonald’s, can we go?” whenever one of those 10-foot billboards popped up on the side of the road.

Growing up with Indian parents, the answer to both of those would, most times, be the same: “not yet.” Sometimes, big brands would even start a billboard war, like this one between Audi and BMW, which got quite a few laughs:

Just think of it this way: Google and Facebook generate more revenue than any traditional media company because they control more eyeballs. That’s why digital marketing matters; it’s where the attention is. The reason why billboards, like the ones above, will die, is because the future of driving will look like this: 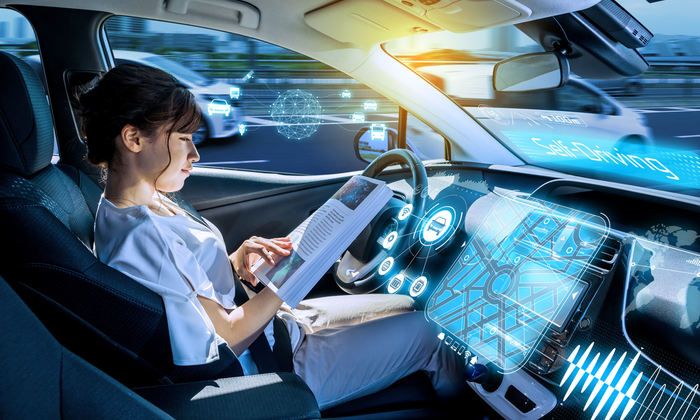 Although driverless cars already exist, drivers still have to pay attention; in the future, as the technology improves, not a single passenger will spend their time looking at the road.

Do me a favour, the next time you drive and are giving a friend a ride, take a peek at the passenger seat. Just for a second. Even now, chances are they’ll be looking at their phone. If no one is looking at the road anymore, who’s supposed to see those advertisements?

That means you don’t have much time to figure out this digital marketing stuff before you can power down your old school printing press and close up shop.

The 7 big categories of online marketing are:

Unbounce created a great infographic that sums up all kinds of online marketing in one neat chart.

The beginner’s guide to online marketing, on Quick Sprout, is a great place to get started.

The History of Digital Marketing

Although it was first popularized as a term in the early 2000s, digital marketing has actually been around much longer.

Like, WAY longer. About 100 years longer, to be exact. Here’s a pic of the first digital marketer in history:

Yup. In 1896 he was the first human to demonstrate a “public transmission of wireless signals.” This dude invented the radio. Shortly after his little demonstration in England, morse signals were transmitted across open water.

While it would take another 10 years for the radio to reach the general public, it sure didn’t take the creators long to realize they could use it to sell stuff. The first live broadcast was from an opera performance at the Met and guess what people did after it?

They bought show tickets! The digital marketing strategy was born.

For example, if your restaurant uses iPads for your customers to create their orders on, then the offline experience of say, eating Thai food, is enhanced with this electronic device.

People have been using digital media to enhance their marketing for decades (you’ve only forgotten in what ways, as you’ll see).

Next, there’s radio marketing. The next time you hear an annoying, over-enthusiastic car dealer shout every word of his or her commercial, thank Mr Marconi.

Of course, we can’t forget television marketing. TV ads have been around for more than half a century (and since 1953 also in colour, nationwide; yes, there was a time before colour TV).

Finally, the biggest and fastest-growing area of offline marketing, with admittedly also a lot of flops, busts, and failures: phone marketing.

Let’s look at the four areas in more detail.

What’s the difference between a billboard somewhere in the desert of Arizona and a billboard in New York City’s Times Square?

The size? The product?

3 letters: LED. Light-emitting diodes. All of the billboards in Times Square are electronic!

Why? Because in the desert of Arizona, no one’s competing with you for people’s attention. If you have a billboard at all, you win. But, in Times Square, attention is probably more valuable than anywhere else in the world. Over 330,000 people cross through it each day.

If you want to be distracted, there’s buses, taxis, promoters shouting, and then, of course, the electronic billboards. Some of them are even interactive, showing live feeds of the people on the square or pictures of customers. Renting a billboard space on Times Square, for a year, will set you back a whopping $1,000,000 to $4,000,000.

What other forms does enhanced offline marketing take? What do you see when you walk into an Apple Store these days?

If you have any type of electronic product, any product demo is an important part of your digital marketing strategy. Okay, the next one’s a good one. If you remember this, you can consider yourself an extremely lucky kid:

This is a demo disc for the original PlayStation. Several of these were handed out with other games or sometimes even magazines.

It was the same with PC magazines. Remember when they came with CDs (and later DVDs) and you couldn’t wait to throw them into your disk drive and see what samples were on them? A little different than a demo, these are product samples in digital format.

Over 100 years have passed since that original first live broadcast of the opera performance at the Met and guess what: radio is still here.

In recent years, radio made a smart move: having the hosts read out advertising sponsorships at the beginning of shows. This is where the host of the radio program reads out a script you or they have written that promotes your product.

To create a sponsorship, find your local radio stations with a quick Google search. Find a station whose audience reflects your company’s target demographic; radio stations should be able to provide you with the data that helps you select the right fit.

For example, if your company sells maternity products, you want to find a radio program whose average listener is a female between the ages of 24 and 40. If you go the traditional radio advertising route, the key is to be entertaining and catch the listener’s attention.

Cadillac and Dairy Queen are two brands that come up with solid radio commercials on a consistent basis. You can listen to some examples here.

Television marketing is such a Goliath, it’ll likely never go away. It’s also easily the industry where the most money is burned each year.

Some fast facts about TV marketing:

Though cable TV ads are harder to target the right audience, have a low ROI compared to other forms of digital advertising, and seem generally irrelevant in the digital age, there is one type of tv ad that may still be worth it; but it will cost ya.

Remember I mentioned that renting a billboard in Times Square, for a year, will set you back a million or more?

A 60-second commercial aired during the Super Bowl costs $5.6 million. Thanks to their cross-pollinating effect, the often viral and memorable commercials still pay for themselves. Roughly 10% of all TV commercial-related shares on social media come from Super Bowl ads. So do about 8% of all views on YouTube that go to TV commercial videos.

If your commercial makes it to the blacklist (commercials the network decides can’t be shown on TV), the viral effect is usually even stronger, like the infamous Carl’s Junior ad that couldn’t be shown in the 2015 Superbowl.

What’s more, these commercials become online assets, generating millions of YouTube views over time. Sadly, the hype of the Super Bowl commercials is probably more of a remnant from a success period that’s about to fade.

The $200 billion that companies still annually spend worldwide on TV commercials is hardly justifiable, as every 10th person in the United States has a Netflix account, with more to come. TV, in the form as we know it, is going to die and will make way for the more custom-tailored experiences we are already getting used to.

So, if you do plan on doing offline digital marketing, I’d suggest that you spend your time and money focusing on a marketing platform or channel of the future.

Nearly 75% of Americans own a smartphone and, in 2014, we crossed the tipping point where more people are accessing the internet from their phone than via a desktop PC or laptop.

Let’s look at some offline ways to market your products using phone marketing. There are 2 apps that are grossly underestimated, yet they are on every phone, smart or not:

Cold calling is the act of calling a person with no prior contact and trying to sell them something. While at roughly 3 sales per day (marketers call 52 people a day, on average, with about 17 calls until they find a buyer), it doesn’t have the scalability of social media or email, it’s still a valid approach to marketing.

The tactic works, but doesn’t scale very well when selling to end customers (B2C) and making contact before trying to sell helps to close the deal (especially in B2B, which is all about connections). What works better is marketing via texting, an “app” that is also available on each and every single phone out there.

Online or offline, a text message is almost a guaranteed read. While you should definitely get permission first, for example, in the form of having your customers text a certain word to a phone number, there are several providers that offer text marketing at scale. There are several ways to leverage text message marketing.

Special deals, coupons, and discounts are a great way for restaurants to get additional customers and turn walk-ins into regulars. You can see more examples of successful restaurant text messaging campaigns here.

Using text reminders as customer service can also enhance your mobile marketing as many pharmacies do. They alert customers when their prescription is ready for pickup. Another option is to create a loyalty program, where you text participating customers special deals and giveaways.

Another option is QR codes. You used to have to download a specific app to use QR codes, but now all you need to do is use the camera on your smartphone and the code will scan, bringing up a webpage.

How to Set Up an Offline Digital Marketing Strategy

What is digital marketing?

What’s the future of digital marketing?

The offline and online worlds are colliding. Traditional devices such as fridges, ovens and even billboards will all be modernized to leverage digital media.

Why does digital marketing matter?

Google and Facebook generate more revenue than any traditional media company because they control more eyeballs. That’s why digital marketing matters, it is where the attention is.

What channels make up digital marketing?

That’s the scoop on digital marketing. As you can see, the internet is, by far, not the only place for marketers to gain success, even today. Of course, no one can afford to miss out on the opportunities of the web and, eventually, every marketer will have to master online marketing.

Employing a few of these offline marketing tactics can help you to not put all of your eggs into one basket in the meantime, as well as diversify your lead generation beyond social media, content marketing, and the like.

Plus the offline and online worlds are colliding. Traditional devices such as fridges, ovens, and even billboards will all be modernized to leverage digital media. Though our agency does not specialize in offline marketing, we can help you if you need help growing or getting your online digital marketing strategy off the ground! Reach out to learn more.

Will you use any of these tactics in your business? Which of these do you remember from back in the day? Have I missed any?

This site uses Akismet to reduce spam. Learn how your comment data is processed.